What Did I Do With An Idea…?

In November 2016, I was charged to have an idea. Being creative on demand has never worked out well for me so this was a very frustrating charge for me.

Although it was much more carefully articulated by the professionals facilitating this, the message was the same. Here is what I heard.

“Come up with an idea and do something with it.” Also, “Do this idea with other people. They must agree with you and nurture the idea with you. And in the end, you must show off your idea with pride to everyone else charged with this daunting task, and other professionals in your field who are expecting you to succeed with this idea.”

Days were being crossed off the calendar.  Weeks gone.

What was my idea? What idea was big enough, original enough, and important enough to be worth the investment these people trusted me with?

On day #1 of this journey, I, and many others from the WCPSS Teach Leader Corps #WakeTLC were put in a room to listen to a man named Kevin Brookhouser speak about what he termed a 20Time project. For an hour, he shared the meaning of a 20Time project and inspiring stories of ideas his students had done something with. We were even given a complimentary copy of his book The 20Time Project. And then he finished and we remained.  It was our turn.

“Come up with an idea and do something with it”.

WCPSS had invested money and trust in us to do something wonderful. “Something”. That is all we had to begin with.  Kevin Brookhouser and “something”.

To make this challenge more challenging, the suggested group size was 5-9, more is better.  The group we were able to form was 3.  Me and two others; Star Davis @sanndavis #starshipk and Nathalie Ludwig @LudwigsBusyBees #kinderscan. Me, an ITF, and two Kindergarten teachers from two different schools.

We would only be given 5 other opportunities to sit face to face with our partners (one of those cancelled due to weather and one was presentation day). An idea that was to be wonderful would surely require more time than what would be 3 face-to-face meetings. How were we going to do this?

What were we going to do?

Eventually, we came up with a viable idea. Just an idea. We didn’t know what it would look like, but it was an idea. It was an idea unlike anyone else’s in the group which made us second guess our idea. We listened to others.  We watched. We were on a completely different path.

Was this what they were expecting from us?

Why weren’t any other groups doing anything like this?

Were we on the right path?

We had been put in front of Kevin Brookhouser for an hour to kick off our challenge on that first day and we felt deeply that there was a reason for this. We were inspired by his stories, and despite no one else following his examples, we knew we must. It was the idea that felt right. We were on the path right for us.

Inspired by Kevin Brookhouser’s 20Time project and the opportunity provided by an investment in our WCPSS Teacher Leader Corp Team, Underwood GT Magnet ES and Washington GT Magnet ES teamed up two kindergarten classes to build empathy, a bonding relationship,  and a concept of community. In the end, these two classes will participate in a service learning project, each class building a better community for the other.

Ok there it was.

To make this authentically THEIR 20Time passion, this had to be designed by the kindergarteners, themselves. We had no idea where this was going to go and what we would need to make it happen. This was as far out of a teacher’s comfort zone as it could get. But we were determined to “do something”.

And we did.  The project grew bigger.  It looked and felt different from everyone else’s. But it was still the right thing to do. We picked it at first, but soon it was picking us.  We just followed its lead. It got bigger. It took more time. It got more and more complex. Resources we hadn’t predicted were required. All the while, it got more and more important to keep cultivating it. It was driving us forward and inspiring us to invest in the ideas the Kindergarteners wanted to bring to life.

What was our idea was now their idea.  We couldn’t have designed it as perfectly as they did.

The two classes met initially through a google hangout and then exchanged photographs of themselves which they carried with them over a period of a month wherever they went around their community with their own families. They asked to meet in person “to shake their buddies hand”. We told them, “no”, at first. But the deeper the relationships got with their “flat buddies”, the more we realized they needed to see each other.  So it happened. Washington GT Magnet Elementary School’s principal Bob Grant funded the opportunity.

A buddy from each school.

The culminating event was and continues to be a service project for their buddy school based on interview results with the students answering how they wish their community could be made better. Survey results determined that both school’s students had big dreams of a better playground.  Their ideas were bigger than they could accomplish on their own so they had to ask for help from their community.

Games donated to each class for an indoor recess game cart.

Parents donated games to both schools and painted hop scotch stencils on one of the playgrounds. Third graders are writing letters to outside community businesses and neighbors asking for donations. Fourth graders are helping write a grant from Wake Ed Partnership. Two kindergarteners spoke on stage with a microphone to the large, adult, TLC, captive audience on “share day” about their project. How BRAVE and grown up (and empowering) is that!?

Listening to Kindergarteners share what Community means to them will probably be the most beautiful part of my day. Love matters! #WAKETLC pic.twitter.com/oAfGmxQLSv 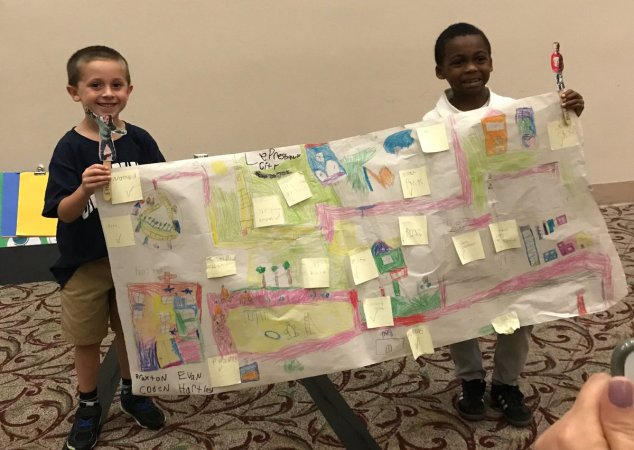 The poster the boys designed to show their perfect community

Our Kinder boys presenting side by side with us at TLC on the final day.

We leave this idea with a promise to each buddy class to enhance the play time experience at the other’s school “to the best of our ability”. Like the path our “do something” project took, we can’t imagine what the best of our ability will look like in the end. And although our sharing out deadline has come and gone, we are not done.  We will continue to feed this project until all parties are satisfied that they accomplished the goals they dreamed. The school year calendar may expire soon, but the work will continue.  Next year’s 1st graders are anticipating promises filled.  Next year’s kindergarteners will continue the legacy and labor of those promises and will fully understand where they were born and how they will impact the school. 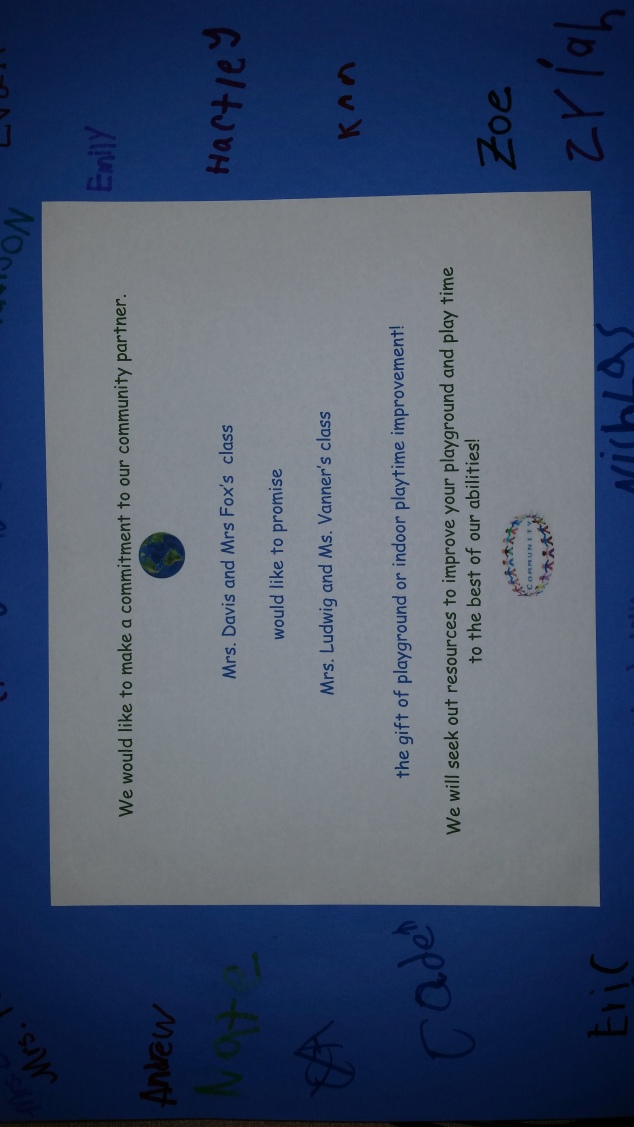 Kinders Promise to each other

So what did I do with an idea? I am not sure I changed the world , yet, with ours as the book by Kobi Yamada and Mae Besom ends with (What Do You Do With An Idea?). But I know for sure, we taught some kindergarten learner’s a thing or two about trusting their imagination and dreaming big. I hope they take this experience with them throughout the rest of their school careers and never doubt their ideas. Maybe in the end this WILL change the world.

inspiring learners and being inspired

Learning with the Littles

My journey of teaching, learning, reflecting, & sharing with the world that #kindersCAN

The latest news on WordPress.com and the WordPress community.